One of the more interesting forms of Chinese charms is the lock.  This type of charm is based on the traditional Chinese device used to safeguard possessions and property.  The charm, however, is flat and of one piece with no moving parts.  The shape is similar to the Chinese character ao (凹) which means "concave".

It is always decorated with Chinese characters and symbols.

The purpose of the lock charm is similar to that of the other charm types in that it is meant to protect a person from evil and to bring good luck, fortune, official rank and long life.

These padlocks could be bought at silversmith shops and varied in size and shape.  Sometimes Buddhist or Taoist (Daoist) priests tied them with their own hands around the necks of children. 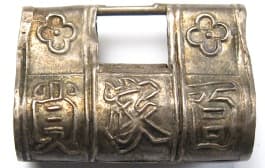 At the left is an example of a type of lock charm known as a bai jia suo (百家锁) or "hundred family lock".

This old "hundred family lock" is made of silver.

It was called a "hundred family lock" because the family of a newborn would give a gift of betel nut to other families as a means to invite them to donate a few cash coins to be used to have the lock charm made.  Families that donated were then vested in the security of the child.  The lock charm was then either worn around the neck by the child or hung in the house in order to "lock" the child to life. 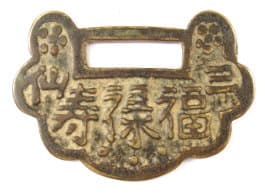 This is the obverse side of an old Chinese lock charm.  The smaller character at the upper right and the smaller character at the upper left are read as san xian (三仙) which means the "Three Immortals".  The Three Immortals are the most important of the so-called "household" or "kitchen" gods.  While these gods are not usually worshipped, they are believed to bring good luck and small statues or pictures of them are found in almost every family home.

The three large Chinese characters in the middle of the charm are the actual names of the Three Immortals.  Read right to left, they are fu lu shou (福禄寿) which means "happiness, emolument (which was the salary a government official received), and longevity.  Fu (福) is the God of Happiness (God of Good Fortune and Blessings).  Lu (禄), the God of High Ranking Office (God of Rank and Emolument), is usually shown as holding a ruyi (如 意) which was originally a short sword with a sword-guard used for self-defense or gesturing but now symbolizes good wishes ("may things go as you wish") and prosperity.  Shou (寿), the God of Longevity, is usually shown with a walking stick and carrying a peach which symbolizes long life.

For more information on Shou, the God of Longevity, and the peach symbol please see Ancient Chinese Peach Charms. 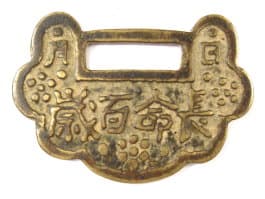 This is the reverse side of the lock charm.  The large Chinese characters in the middle are read right to left as chang ming bai sui (长命百岁) which can be translated as "long life of 100 years".  The small character at the upper right is ri (日) which means sun or day.  The small character at the upper left is yue (月) which means moon or month.  Displaying the sun and moon in this way symbolizes that the charm's good luck should be continuous day and night.  Above and below each of these Chinese characters, and on the bottom of the obverse side of the charm, are dots representing stars.  The sun, moon and stars together are known as the "three lights" (sanguang 三光) and are considered a symbol of good luck.

To the right, left and below the inscription are clusters of five dots which represent the plum blossom.  The plum blossom is also displayed at the very top right and top left on the obverse side of the charm.  In winter, the plum blossom grows new flowers from seemingly dead branches.  It, therefore, offers the promise of renewal and rejuvenation, continuity and happiness of life, in the face of adversity.

The plum blossom symbolizes the "five blessings" (wufu 五福), also known as the "five happinesses" or "five good fortunes". These five blessings refer to longevity (寿), wealth (富), health and composure (康宁), virtue (修好德), and the desire to die a natural death in old age (考 终命).  These blessings are consistent with the meanings of the inscriptions on both the obverse and reverse of the charm. 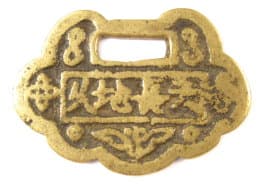 This old lock charm is smaller and has clearly seen a great deal of use over the centuries.

The inscription from right to left reads tian chang di jiu (天长地久) which can be translated as "as eternal and unchanging as the universe". 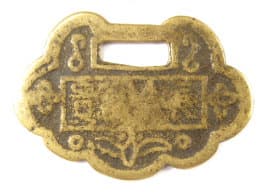 The inscription on the reverse side is so worn that the characters are barely legible.  Read from right to left is the very common auspicious inscription chang ming fu gui (长命富贵) which translates as "longevity, wealth and honor".

This lock charm is slightly greater than 53 mm at its greatest width and a little more than 36 mm in length. 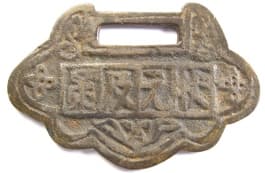 The inscription on this ancient lock charm is read right to left as zhuang yuan ji di (状元及第) which translates as "the first rank at the examination for the Hanlin Academy".

Zhuang yuan (状 元) is the rank awarded the top scholar in the final round of the imperial examinations which would assure a person a top position in the government with all the commensurate rewards and honors. 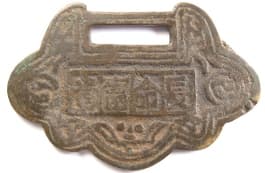 Similar to the charm described above, the reverse side of this charm includes the auspicious inscription chang ming fu gui (长命富贵) meaning "longevity, wealth and honor". 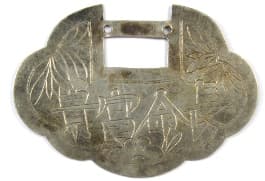 This is an example of a Chinese lock charm made of silver.

The inscription, the same as that of the lock charm above, is chang ming fu gui (长命富贵) which means "longevity, wealth and honor".

There is a tree peony or mudan (牡 丹) flower at the very bottom.  This flower is also known as fuguihua (富贵花) which means "flower of wealth and honor". 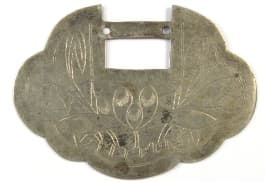 The reverse side of the lock charm displays a lotus.

In the center is displayed three lotus pods. Lotus seeds (lianzi 莲 籽) convey the auspicious meaning of "continuous birth of children" because lian sounds like "continuous" (连) and zi has the same pronunciation as "son" or "child" (zi 子). 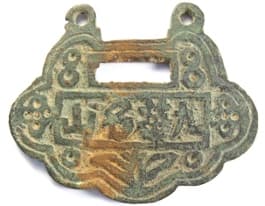 This lock charm commemorates one of the four sacred mountains associated with Chinese Buddhism.

The inscription reads right to left as jiu hua ming shan (九华名山) which translates as "the famous Mount Jiuhua".

The other sacred Buddhist mountains are Mount Emai in Sichuan Province, Mount Wutai in Shanxi Province, and Mount Putuo in Zhejiang Province.

At one time during its long history, Mount Jiuhua had more than 300 temples and monasteries with 5,000 monks and nuns.  With so many temples congregated in one area, the mountain became known as the "land of Buddhas and incense".

At the present time there are about 80 temples on Mount Jiuhua. 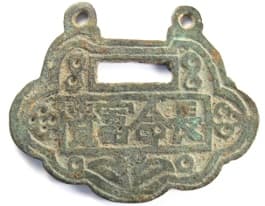 The reverse side of this Mount Jiuhua lock charm has the popular inscription chang ming fu gui (长命富贵) meaning "longevity, wealth and honor". 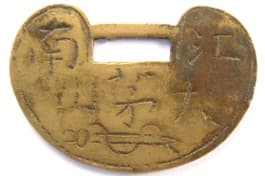 Mount Maoshan (mao shan 茅山) is located in Jiangsu Province and is one of the famous mountains associated with Daoism (Taoism).  It is known as "the first land of blessing" and "the eighth world of caves" of Daoism.

The mountain's association with Daoism dates back to the year 153 BC when three brothers with the surname "Mao" became famous for their healing powers.  The original name of the mountain (Mount Juqu) was changed to Mount Maoshan to honor the three Daoist brothers.

Mount Maoshan became a major center of Daoism with many temples and many eminent Daoist priests.  It is considered the birthplace of the Maoshan Sect, Shangqing Sect and Lingbao Sect.

During the Taiping Rebellion (1850 -1864), however, about 90% of its temples were destroyed.  Many of the surviving temples suffered damage during the Cultural Revolution (1966-1976) although some have since been rebuilt.

Regarding the lock charm displayed here, the two Chinese characters written at the very top are read right to left as jiang nan (江南).  "Jiannan" refers to the region south of the Yangtze River (Changjiang 长江) which would include the area of Jiangsu Province where Mount Maoshan is located.

The three-character inscription written across the middle of the lock is read right to left as da mao shan (大茅山) which means "the great (Mount) Maoshan".

At the very bottom of the charm is a sword wrapped in a fillet or ribbon.  The sword is a prominent symbol of Daoism which can be used to slay evil spirits.  A fillet or ribbon wrapped around a sword augments its power. 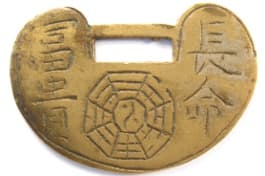 The reverse side of the lock charm has a four-character inscription read in the following order: top right, bottom right, top left, bottom left.

In the middle of the charm are the "eight trigrams" (bagua 八卦) which derive from the ancient Book of Changes (I Ching 易 经) and are believed to have the power to repel evil influences and drive away evil spirits.  The bagua is also used in divination and feng shui.

In the very center of the bagua is the yin yang (阴 阳) or taiji (太 极) which represents the basic polarities of the universe.