Through observation, ancient Chinese astronomers calculated the orbit of Jupiter to be approximately 12 years and, therefore, divided the celestial circle into 12 parts.  This time system was gradually applied to the Earth year with one 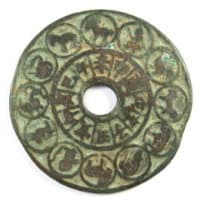 By the time of the Spring and Autumn Period (770 - 476 BCE), the Earthly Branches had already become linked to the 12 animals (生肖) of the Chinese zodiac.  These animals are the Rat, Ox, Tiger, Rabbit, Dragon, Snake, Horse, Sheep, Monkey, Rooster, Dog and Boar (Pig).

The linking of a person's birth year with a particular zodiac animal started during the Eastern Han Dynasty (25 - 220 AD) and became quite in vogue during the Tang Dynasty (618 -907 AD).

The Chinese Zodiac and the Emperors of China

The popularity of the animals of the zodiac was not limited to the common people but also included the emperors.

Emperor Hui Zong of the Song Dynasty was born in the year of the Dog.  For this reason, he issued an imperial edict prohibiting the killing of dogs.

Emperor Ren Zong of the Yuan Dynasty was born in the year of the Rooster and issued an imperial edict strictly prohibiting anyone within the capital city from carrying a chicken upside down.  Those found violating this edict would be punished severely without mercy.

Some emperors went to even greater extremes.  Emperor Wu Zong of the Ming Dynasty was born in the year of the Boar.  In the year 1519, he issued an imperial edict prohibiting the raising and slaughter of pigs.  Anyone who violated this edict would have himself and his entire family banished to a distant place for penal servitude.  However, this had an unintended consequence.  The following year during the Qing Ming Festival, the emperor and the common people were required to sacrifice pigs to honor their ancestors but there were no pigs to be sacrificed.  As a result, the edict was rescinded.

From the above, it can be clearly seen that the 12 animals of the Chinese zodiac were taken to be of extreme importance not only by the common Chinese but by the emperors as well.

Examples of old Chinese zodiac charms displaying the 12 Animals and the 12 Earthly Branches are displayed below. 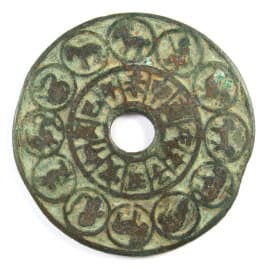 This is the reverse side of an old Chinese zodiac charm showing a picture of each animal in its own circle with the 12 Zodiac Animals towards the outside rim.

The Earthly Branch associated with each animal is shown surrounding the inner circular hole. 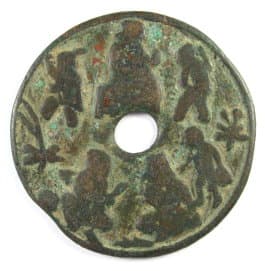 The obverse side of this charm displays six persons but the meaning is unclear.

Some say that this is a scene of six children "playing".

Others interpret the scene as showing the Queen Mother of the West (xiwangmu 西王母) with five children.  The five children would probably be all boys as traditionally the ideal family was considered to be five sons and two daughters.

Unfortunately, I have not been able to find a reference to the Queen Mother of the West with five children so I am still not certain of the exact meaning of this charm.

This charm has a diameter of 56 mm. 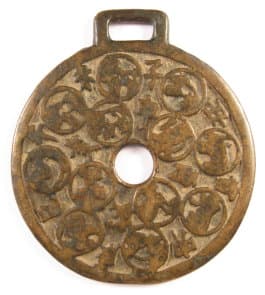 This old charm has a square loop at the top.  The charm could be worn as a necklace or hanging from the waist.  Charms of this type were also hung from house rafters or other places.  Other "hanging" charms may be seen at pendant charms.

This side of the charm depicts each of the Zodiac animals in a circle with the entire group occupying most of the area of the reverse side.

Because the charm is quite worn from use over many years, it is difficult to make out from the pictures which animal is which.

However, the Chinese character of the Earthly Branch associated with each animal is shown to the left of each animal. 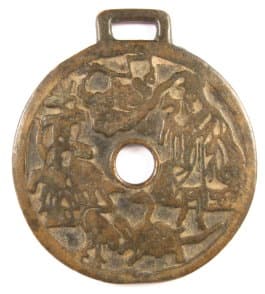 The obverse side of this ancient Chinese charm displays a number of traditional symbols.

Above the circular hole is the Big Dipper constellation.  Below the constellation is what is described as an auspicious cloud (yunqi 云气).

Below the circular hole is xuanwu (see Four Divine Creatures) which is a tortoise entwined by a snake that eventually evolved into the Daoist warrior god Zhenwu (真 武).  To the left of xuanwu is a crane which represents longevity.

One interpretation of the theme of this charm is that it depicts the two sage kings Yao and Shun.

Another interpretation is that these are two "immortals".

However, I believe the scene is actually Lao Zi (Lao Tzu 老 子), the founding philosopher of Taoism, meeting with Zhang Daoling (张道陵), the founder of the first Taoist religious sect which was known as the "Five Bushels of Rice" ("Five Pecks of Rice" or Wudou Mi Dao 五斗米道).  For a more detailed discussion of this particular charm, please visit Daoist (Taoist) Charms. 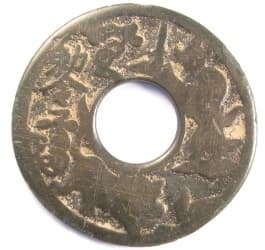 This ancient charm shows considerable wear and probably dates to the Song or Yuan period.

It has an unusually large circular hole and symbols which are difficult to identify with confidence.

At the ten o'clock position is the Chinese character chi (敕) with the character ling (令) written just below it.
Chiling (敕令) translates as "imperial order" or "edict".

To the right of the hole is a deity standing with a sword in hand who is prepared to provide protection and enforce the "edict". (See "Swords and Amulets" for a discussion of sword symbolism.)

Below the hole is an animal that appears to be cat or tiger.  Both animals are symbols of protection.

The tiger is one of the Chinese zodiac animals and the Chinese word for tiger (hu 虎) has the same pronunciation as the word "to protect" (hu 护). 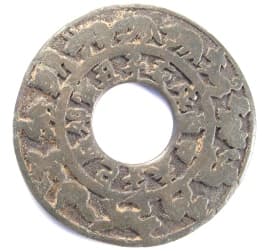 The reverse side of the charm displays the 12 animals of the zodiac along the outside rim.

The corresponding Earthly Branches surround the inside rim. 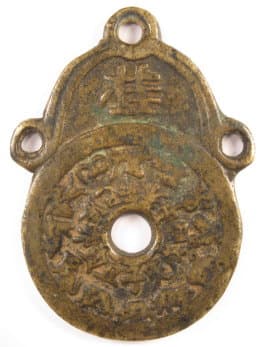 This old Chinese zodiac charm is also well worn from use.

There is a canopy on top of the round body with three holes at the top.

Also at the top is the character gua (挂) which means to hang.  As is the case with the charm shown above, this charm was meant to be either worn has a necklace or hanging from the waist, or hung from a rafter or other structure.

The reverse side shows the 12 Animals of the Chinese Zodiac surrounding the outside rim.

The Earthly Branch associated with each animal is shown encircling the inner hole. 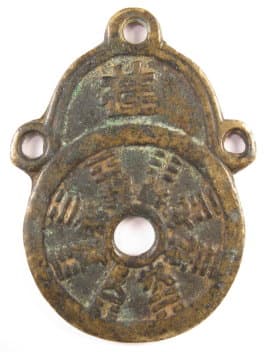 The obverse side displays the bagua.  For a discussion of the bagua please see The Book of Changes and Bagua charms.