There existed a shortage of official government issued currency in parts of China as a result of the Qing Dynasty beginning to lose its authority during the late 1800's and during the turbulent early years of the Republic.   To help alleviate this coin shortage, private banks and large businesses began to issue their own form of "money".

The problem was especially acute in certain areas of East China from roughly the 1870's to 1940's and examples of locally issued currency from these areas, made of metal, may be seen at Chinese Tokens.

However, another form of local currency that was particular to the Jiangsu (江苏), Zhejiang (浙 江) and Shandong (山东) provinces of east China was made not from metal or paper but from bamboo.  This type of money is variously known as "bamboo tallies", "bamboo tokens" and "bamboo money" and was commonly used in such establishments as stores, restaurants, teahouses, and even brothels.

Bamboo does not have the intrinsic value of gold, silver or bronze coins.  Additionally, bamboo tallies were not backed by any reserves of gold or silver.

Bamboo tallies are actually a form of "token" currency which relies on "trust".  This means that the people had to have faith that the issuing banks and merchants would stand behind this type of money.

Just as it is easy to issue paper money in any desired denomination, bamboo tallies which consisted of a simple bamboo slip were issued in denominations ranging from one fen to several thousand cash coins.

While this form of currency circulated throughout Jiangsu, Zhejiang, and Shandong Provinces, it was mainly concentrated in Suzhou (苏州), and neighboring cities, located about 85 kilometers from Shanghai (上海).

Bamboo tallies continued to be used even into the 1960's.

How the Bamboo Tallies Were Made

The bamboo from which the tallies were made came from the Zhejiang (浙江) and Anwei (安慰) areas.

After the outer skin of the bamboo was removed, the stalk was cut into small rectangular strips usually about 90 mm in length, 12 mm in width and 6 mm thick.

Metal tools were used to sculpt out areas on the obverse side of the bamboo strip and then used to form the Chinese characters indicating the denomination, and, sometimes, the year of issue.  On the reverse side, usually on the bottom portion, was sculpted the name of the issuing merchant or bank.  The middle area on the reverse side usually had a serial number written in ink.

On the sides of some tallies is written in black ink the name of the company that actually manufactured the tally.  The other side sometimes has written a warning such as shi qu bu bu (失 去不补) meaning "not compensated if lost" in order to enhance the authority and to prevent counterfeiting.

Finally, the bamboo strip was coated in a lacquer in order to improve the appearance and provide added strength.

As a result, the bamboo tally took on most of the attributes of "real" money including a stated denomination, the name of the issuer, the year of issue, a serial number, the name and address of the manufacturer, and even included some basic anti-counterfeiting measures.

At the left is a very nice example of a bamboo tally.

Just below the hole and coated with yellow paint, are the Chinese characters shi wen (十文) which means "10 cash coin" or "value 10 cash coin".  A "10 cash coin" was slightly larger than the a normal "cash coin" and had the equivalent value of ten cash coins.

Written vertically below this is chuan qian er bai wen (串錢貳百文) which means "a string of 200 cash coins".  Traditionally, large numbers of cash coins would be tied together with a string to facilitate carrying and counting.  One string would frequently contain 1,000 cash coins although, in this case, the stated number on a string would be 200 coins.

Why so complicated?  Why not just make the denomination equivalent to 200 each of the common "one cash" coins?

The reason has to do with the concept of "token" money.  For example, government minted "10 cash" coins were only slightly larger and heavier than the normal "one cash" coins.  This meant that one "10 cash" coin did not have the equivalent metal (bronze or copper) and, therefore, the same intrinsic value of 10 each cash coins.

Similarly, this bamboo token has a stated value of 200 cash coins.  However, if redeemed by the issuer, a person would receive 20 each of the "10 cash" coins instead of 200 each of the normal "1 cash" coins.  The value, in terms of weight of bronze or copper, would be less.

In this way, the issuer of the tally would make a profit since the issued value was more than the promised redeemed value.  Chinese central authorities found it profitable throughout history to issue coins of large denominations but less intrinsic value.  During times when the central government was losing authority and there was a shortage of smaller denomination coins, such as during the collapse of the Qing Dynasty, private companies and local authorities took advantage of the situation to issue this type of token currency.

Also, in general, these tallies would continue to circulate in their local areas as currency and were not turned in to be "redeemed" by the issuer as long as the people maintained "trust" that the token had "value" or "worth".  This meant that the profit was kept by the issuer.

At the very bottom of the tally are the two Chinese characters xin hao (信号) which translates as "warranty mark" which implies that the bearer of the token can trust that the tally issued by this company is worth the stated value.

At the far left is the reverse side of this bamboo tally token.

Above the round hole are the Chinese characters yi wei (乙未).  This is the year the token was issued according an ancient Chinese calendar system which dates back to the time of the oracle bones (circa 1350 BC) of the Shang Dynasty  (16th century BC - 11th century BC).  The years are indicated by pairing one of the ten Heavenly Stems with one of the twelve Earthly Branches (animals of the Chinese Zodiac).  The cycle repeats itself every 60 years.

In this case, the characters (yi wei 乙未) indicate that the token was issued in the year 1895 during the reign of Emperor De Zong (1875-1908) who adopted the period title of Guang Xu.

Below the hole is handwritten in black ink in very nice calligraphy the serial number of the token.  Tokens were issued in a certain quantity with each having its own serial number.  It is believed that this particular series of bamboo tokens was issued in a quantity of 10,000 pieces although this has not been confirmed.

At the bottom of the token is written guang shan zhuang (光山庄) which is the name of the company that issued the token.

The image in the middle is the left side of the token.

Written by hand is shi qu by bu (失去不补) which is a warning that translates as "not compensated if lost" or "if lost no refund".  The character 补 (bu) is written here in the abbreviated form 卜 (bu).

There is some controversy regarding the meaning of the paint which is commonly found at the top of these tallies.  Some believe that red or yellow paint may mean that the token has been canceled.

This is another bamboo tally issued by the same company.

At the far left is the obverse side.

The first two small Chinese characters are written horizontally and are the same as on the tally above.  They read shi wen (十文) which means "10 cash coin" or "value 10 cash coin".

Beneath this and written vertically is chuan qian yi qian wen (串钱壹仟文) which translates as "a string of 1000 cash coins".

At the bottom of the tally are the Chinese characters xin hao (信号) meaning "warranty mark" and indicating that the tally can be trusted to be worth its stated value.

The middle image is the reverse side of the token.

Written at the very top and above the round hole are the Chinese characters wu chen (戊辰) which, according to the "stem-branch" 60-year cycle mentioned above, indicates that the tally was produced in the year 1928.

Just like the above tally, the name of the issuing company guang shan zhuang (光山庄) is written at the very bottom.

The image at the far right is the left side of this bamboo tally.  Written vertically by hand is chang men nei li shui guan qiao dong xia tang da jie shen xiang tai zhi (阊门内里水关桥东下塘大街沈祥泰制).  This is the name (Shen Xiang Tai) and address of the company that actually manufactured the bamboo tally for Guang Shan Zhuang, the company that issued the tally.  The address translates as:  Inside the Changmen Gate, east of the Lishuiguan Bridge, on Xiatang Street.

Changmen Gate is located in the ancient city of Suzhou which is famous for its classical gardens.  During the late Qing Dynasty, this area of the city was also known for its wood and bamboo handicrafts.

The right side of this bamboo tally has no inscription and is not displayed.

This bamboo tally is very interesting for a number of reasons.

The image at the far left has the inscription at the top written in seal script as yong yu he ji (永裕和记) which translates as "seal of the Yongyuhe Company".

At the very bottom is written the denomination of this token.  The top right character is di (底) meaning "to pay the sum of".

The character at the upper left is a "rod numeral". Rod numbers are based on a very ancient Chinese counting system that used rods or small bars in different positions to indicate numbers.  In this case, the vertical line with two horizontal lines perpendicular to it represents the number "seven".

Beginning in the year 1900, the tong yuan (铜元), also known as tong ban (铜版), copper coin began to replace the Chinese cash coins, the ones with the square hole in the middle, that had been used for about 2,000 years.  Tong yuan coins were made by machines and not cast as were the old cash coins.  Also, each tong yuan coin was worth the equivalent of 10 cash coins. 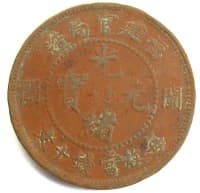 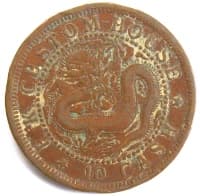 Therefore, the complete meaning of the inscription is "the sum of 1,000 wen will be paid with tong yuan coins (valued at 10 wen each) less a commission of 7 tong yuan coins".

Unlike the bamboo tallies displayed above, this tally does not have a date.  However, the tong yuan coins first appeared in 1900 and continued to be minted into the 1920's so this tally would have been created sometime during this time period.

The reverse side of the tally is most distinctive because it displays a picture of Cai Shen (财神), the "God of Wealth".  Caishen is shown holding a scroll with the inscription jiang ji (姜记) which means "the seal of Jiang".  Jiang (姜) is a family surname in China.  The reference is unclear but Jiang may refer to the owner of the company.

The inscription at the very top reads hai yi gao jia (海邑高家) which was where the company was located.  Haiyi (海邑) was a city or district in Shandong Province and may have been the city of Haiyang.  Gaojia (高 家) would have been a small area or part of Haiyi.


The inscription at the very bottom of the bamboo tally is yong yu he ji ("seal of the Yongyuhe Company"), the same as that written at the top on the other side of the tally.  In this case, however, the characters are written in regular script instead of seal script.

There is one final difference between this tally and the ones illustrated above from Suzhou.  This tally has no inscriptions written on the sides.