The "Eight Treasures" (babao 八宝), also known as the "Eight Precious Things" and the "Eight Auspicious Treasures", are symbols of good luck and prosperity and are actually a non-specific group of a larger collection of antique items known as the "Hundred Antiques" (baigu 百古) or "Hundred Treasures".  This larger collection consists of items used in calligraphy (brush, ink, paper and ink slab), painting, music, chess, etc.

The "Eight Treasures" may consist of eight ordinary symbols, the eight precious organs of the Buddha's body, the eight auspicious signs, or the various emblems of the eight Taoist Immortals.

In the case of old Chinese charms, the most commonly seen symbols are the coin, ruyi sceptre, coral, lozenge, rhinoceros horn, silver ingot, stone chime, and the flaming pearl.

Displayed below are several examples of eight treasure charms with detailed explanations of their inscriptions and symbols. 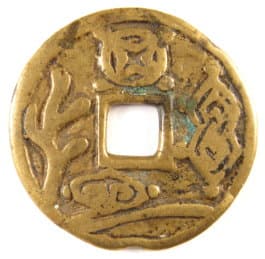 This particular example of an eight treasure charm has no inscription.

The charm displays four of the "ordinary" treasures on one side and another four on the other side.  The symbol at the very top is a coin (qian 钱) which represents prosperity.  The coin is typical of ancient Chinese coins in that it is round with a square hole.

The symbol to the right is known as a "lozenge" or, in Chinese, a fang sheng (方 胜).  A pair of overlapping lozenges is considered a lucky object although the actually origin is still unclear.  A lozenge is an object with a diamond shape.  It sometimes has a compartment on its top side.  As is the case here, two lozenges are frequently interlocked to represent the form of an ancient musical instrument.  It is said that this object was also used as a head ornament in ancient times and symbolizes victory.  Legend has it that the Queen Mother of the West (xiwangmu 西王母) wore such an object to exorcise evil spirits.

The symbol on the bottom is a sceptre which represents power or authority.  The object is also known as a joo-i or ruyi (如意) which is usually translated as "as you wish" or "in accordance with your desires".  The ruyi was originally a short sword with a sword-guard used for self-defense or gesturing.  It now symbolizes good wishes and prosperity. The symbol to the left of the center hole is coral (shanhu 珊瑚).  To the Chinese, coral is an emblem of longevity and official promotion.  The Chinese believed that coral represented an "iron tree" (tieshu 铁树) that grew under the sea and blossomed only once every hundred years, hence the meaning for longevity.  The symbol of official promotion refers to identifying the nine grades of government officials by the coral button on their hat. 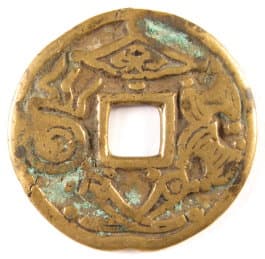 The reverse side of this eight treasure charm displays another four treasures.  At the top appears to be a single lozenge which, again, represents victory.

To the right of the center hole are two silver ingots.  Silver became established as a measure of value during the Ming Dynasty (1368 - 1644 AD).  The silver was moulded into boat-shaped or shoe-shaped ingots called sycee (细 丝) which could weigh from 1 to 100 ounces.  Silver ingots symbolize brightness and purity.

At the bottom of the charm are a pair of rhinoceros horns (xijiao 犀角) which symbolize happiness because the first character (xi 犀) is pronounced the same as the character for happiness (xi 喜).

The symbol to the left of the center hole is a flaming pearl which represents riches as well as pure intentions and genius in obscurity.

The charm on the left is another example showing the same four treasures as the charm above.  The only major difference is that this charm does not have some of the "protrusions" or "dots" attached to the fang sheng, coin and coral that the first example has.

Because the Chinese believe charms have special powers, these protrusions are believed to represent rays or auras emanating from objects.  On other Chinese charms displayed on my website you will sometimes see an object's picture wrapped or tied with "fillets" which are ribbons.  The Chinese like to tie red ribbons around objects because red (hong 红) is emblematic of good luck. 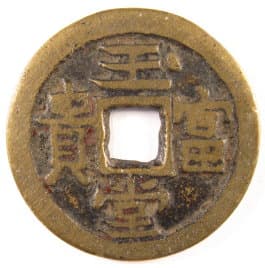 This is the obverse side of the above charm.  You will note that this charm only depicts four of the treasures because of the four character inscription on this side.

The Chinese characters yu tang fu gui (玉堂富贵) are read top to bottom and then right to left.  The literal meaning of the Chinese is "Jade Hall, wealth and honor".  The "Jade Hall" refers to the "Hanlin Academy" which was the government office which received only those scholar-officials who had attained the jinshi degree.  The purpose of this charm was therefore to bring good luck to a person in attaining a high government office where wealth and honor would then follow. 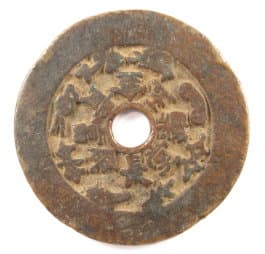 The charm to the left has an eight character inscription on the obverse surrounding the round central hole.  The inscription is read clockwise as chang ming fu gui jin yu man tang (长 命富 贵金玉满堂) which translates as "longevity, wealth and honor", "may gold and jade fill your house (halls)".

Surrounding the outer rim are eight treasures.  Starting at the one o'clock position and going clockwise are the pearl (flaming pearl), the silver ingot (sycee or yuan bao), the double lozenge, the coral, a single rhinoceros horn, the writing brush and Chinese ink, the precious mirror, and the sceptre (ruyi).

The charm has a diameter of 54 mm and a thickness of 3 mm. 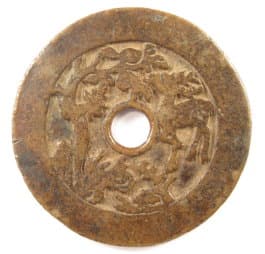 There are other examples on this charm of using symbols with hidden meanings.  Just below the deer's front hoof is an "upside down" bat.  In Chinese, saying the words "an upside down bat" is pronounced exactly the same as saying the words "happiness has arrived".

There is one additional example of a symbol with a hidden meaning.  Between the tree and the center hole, at about the 9 o'clock position, is a crab.  The Chinese word for crab (蟹) and the Chinese word for harmony (协) are both pronounced xie.  Depicting the crab is therefore expressing a wish for harmony.

Also, the Chinese word for the shell (jia 甲) of the crab has the additional meaning of "first" and , therefore, expresses the wish to attain the highest score in the imperial examinations to become a government official. 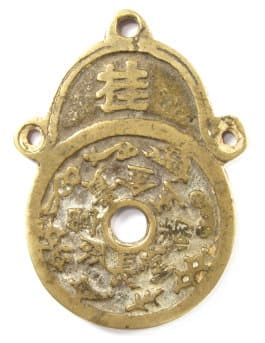 The charm to the left is almost identical to the one above except that it has a canopy on top with three holes or loops.  The large Chinese character at the top is gua (挂) which means "to hang".

This type of charm was made to be worn but also could be hung anywhere.  It was usually hung around the waist or worn as a necklace.

The same eight treasures, in the same order, are depicted surrounding the outer rim.  Starting at the one o'clock position and going clockwise are the pearl (flaming pearl), the silver ingot (sycee or yuan bao), the double lozenge, the coral, a single rhinoceros horn, the writing brush and Chinese ink, the precious mirror, and the sceptre (ruyi). 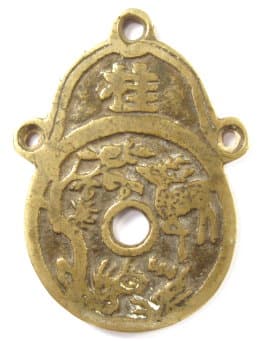 The reverse side also has the gua (挂) character at the top meaning "to hang".

As is the case with the previous charm, there is a deer to the right of the round central hole.  Since the Chinese characters for deer (鹿) and the salary of a government official (禄) are both pronounced lu, the deer represents the wish for a top government office with a high salary.

An "upside down" bat is below the deer's front hoof.  In Chinese, saying "an upside down bat" sounds exactly like saying the words "happiness has arrived".

Between the tree and the center hole, at about the 9 o'clock position, is a crab.  The words for crab (蟹) and harmony (协) are both pronounced xie.  The crab therefore symbolizes a wish for harmony.

For additional information on the use of charm symbols and their hidden meaning, please see The Hidden or Implied Meaning of Chinese Charm Symbols.

A charm displaying a "treasure bowl" filled with treasures can be seen at Chinese Treasure Bowl Charm.