Turtle-Shaped Coin of the Han Dynasty Emperor Wu of the Han Dynasty Because of expenses incurred in fighting the Xiongnu (匈奴) and opening up new territories, Emperor Wu (武帝 156 BC – 87 BC) of the Han dynasty (汉朝 202 BC – 220 AD) was in desperate need to raise revenues and in 119 BC decided to issue a new type [...] 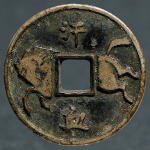 “Horse coins” have been mentioned in Chinese literature for centuries but it is still unclear exactly how they were used. It is believed, however, that beginning in the Song dynasty (960-1279 AD) they were used as either game (打马格钱) or gambling (打马博戏) pieces. Most pieces commemorate a famous horse from ancient Chinese history. Some of [...]