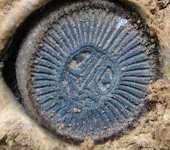 ‘Ancient Chinese coin’ discovered by villager while digging at ancestral burial site A recent newspaper article tells the story of a Chinese villager who decided to move his family’s ancestral graves to a place with better feng shui (风水). While digging, he accidentally uncovered an ancient coin. He had heard stories of people becoming rich [...]

The Cultural Relics Bureau of Jinshi City (湖南省津市市文物局), located in Hunan Province (湖南省), is offering a reward of $1,500 (RMB 10,000) to anyone who can decipher the inscription on some ancient gold coins in the city’s museum, according to an article published February 16, 2016 in the Beijing Daily (北京日报). The six gold coins, which [...]

Chinese archaeologists recently completed their work excavating an ancient tomb located near Luoyang (洛阳), Henan Province (河南省), according to recent reports in the Chinese press. The archaeologists from the Luoyang Municipal Institute of Cultural Relics and Artifacts (洛阳市文物考古研究院) can be seen working in the tomb in the image at the left. The archaeologists believe that [...]

“Ministers of Fire” is a newly-published critically-acclaimed novel by Mark Harril Saunders which displays an ancient Chinese soldier on its dust jacket. The soldier is not a creation of a graphics designer but is actually an ancient Chinese chess piece dating back about 1000 years. The author contacted me late last year after seeing the [...]

The ruins of an ancient city wall dating from the Tang Dynasty were recently discovered in Fuzhou (福州), the capital city of China’s southeastern province of Fujian (福建), according to a local newspaper article. The city wall dates back 1,100 years and is unusual because some of the bricks display the design of an ancient [...]

A 200-year-old carved wooden window, described as a rare and exquisite treasure, was recently discovered in a small village flea market in China’s southwest Yunnan Province, according to an article in the Kunming Daily (昆明日报). Mr. Yang Anning (杨安宁), a well-known expert in ancient Chinese architecture, described the well-preserved window as a “cultural heritage gem” [...]

An article in the Suqian Evening News (宿迁晚报) reported an unusual discovery.  Chinese archaeologists excavating a multiple tomb site in Suqian (宿迁), a city in northern Jiangsu Province (江苏), unearthed a coffin with no corpse.  The only thing inside the casket was a coin. Most of the tombs being excavated at the site date from [...]

The official opening of the Xian Numismatic Museum (西安钱币博物馆) was announced today in a Chinese newspaper article. The new money museum is located in the ancient city of Xian (西安), the capital of Shaanxi Province (陕西).  Xian, formerly known as Changan (长安), has a history of more than 3,100 years and was the eastern terminus [...]

Store signs (招牌) in ancient China started to become common during the Song Dynasty (960-1127).  By the time of the Ming (1368-1644) and Qing (1644-1911) dynasties, stores had developed several types of signs to establish their identity. The first store signs consisted of a simple piece of cloth with some Chinese characters which was hung [...]