The Cultural Relics Bureau of Jinshi City (湖南省津市市文物局), located in Hunan Province (湖南省), is offering a reward of $1,500 (RMB 10,000) to anyone who can decipher the inscription on some ancient gold coins in the city’s museum, according to an article published February 16, 2016 in the Beijing Daily (北京日报). 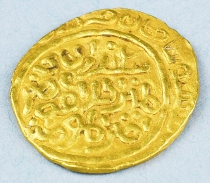 The six gold coins, which are classified as first-level national cultural relics (国家一级文物), were discovered during the 1960s buried in a small white glazed pot at a farm in Jinshi (津市).

The coins were moved to Jinshi City’s museum in the 1980s.

According to Mr. Peng Jia (彭佳), Director of the Cultural Relics Bureau of Jinshi City, the coins are hammered in a manner similar to that used by the ancient Greeks.

According to Mr. Peng, the inscription on the obverse side of the coins is the name of a king written in a rare form of Arabic.

The museum staff, as well as other Chinese and foreign experts, have been unable to decipher the inscription on the reverse side of the coins which is shown in the image above.

By offering the reward, it is hoped that the mystery surrounding the coins can be solved.