A Chinese charm displaying non-Chinese characters was recently featured on the website of the Beijing Hanhai Auction Company (北京翰海拍卖有限公司).

The only information provided, besides its size and weight, is that the charm “has writing from one of the ethnic minority groups of China”.  No translation is offered nor is there any hint as to the charm’s possible purpose. 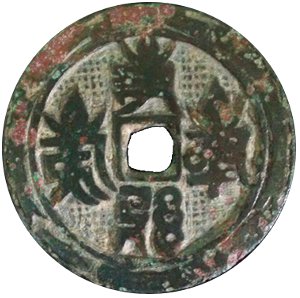 At the left is the obverse side of the charm.

The shape of the characters and the colors of the patina make for a visually striking appearance much more akin to an ancient Chinese bronze.

The checkered field between the characters adds to its attractiveness.

This charm is not well documented but some experts believe it to be a Chinese Buddhist charm.

The inscription is not written in the script of one of the ethnic minorities of China but rather in Sanskrit.

The inscription is believed to be “a mi tuo fo” (啊弥陀佛).  “A mi tuo” (啊弥陀) is a transliteration of the Sanskrit word “Amida” which means “boundless”.  The “fo” (佛) refers to Buddha.

The inscription thus references the Amida Buddha of Pure Land Buddhism and the expression “a mi tuo fo” is considered to be a Buddhist blessing with the general meaning of “may Buddha protect” or “take refuge in the Buddha”. 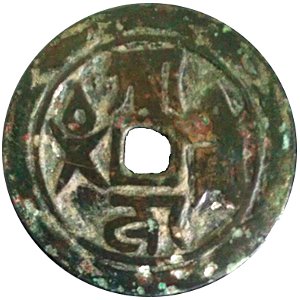 Reverse Side of Chinese Buddhist Charm with Sanskrit Characters

The reverse side of the charm also has four Sanskrit characters but, unfortunately, the meaning of the inscription is still not understood.

Although Buddhist temple coins were popular during the Yuan Dynasty (1271-1368), the first appearance of this Buddhist charm with its Sanskrit inscription is believed to have occurred during the Ming Dynasty (1368-1644).

Please visit Buddhist Charms for additional images and a more detailed discussion of the history of Buddhist temple coins and charms in China.

Regarding the charm discussed above, the dictionary (page 556) confirms that it is Chinese and dates from the Ming Dynasty (1368-1644).

The dictionary offers two opinions as to the inscription on the obverse side.  It may be Sanskrit with the meaning “a mi tuo fo”.  The other possibility is that it is the six-syllabled Sanskrit mantra “om mani padme hum“ (an ma ni ba mi hong 唵嘛呢叭咪吽).

Unfortunately, the dictionary admits that the inscription on the reverse side remains “unknown”.

However, another specimen of this charm appeared in an auction in China on May 20, 2014.

According to the auction house, the obverse inscription is Sanskrit for “a mi tuo fo“.

The inscription on the reverse side is Sanskrit for “Heaven, Earth, Water, Fire” (天地水火).

The interrelationship of these concepts is described in ancient Chinese texts such as the “Yi Jing” or “Book of Changes” (易经).  “Heaven” (天) and “Earth” (地) are considered as a pair of opposites, as are “Water” (水) and “Fire” (火).

The dualities of heaven and earth, and water and fire, are representative of the harmony and balance in nature.