A 200-year-old carved wooden window, described as a rare and exquisite treasure, was recently discovered in a small village flea market in China’s southwest Yunnan Province, according to an article in the Kunming Daily (昆明日报).

Mr. Yang Anning (杨安宁), a well-known expert in ancient Chinese architecture, described the well-preserved window as a “cultural heritage gem” having the distinctive artistic style of a Yunnan carved wooden window from the late Qing Dynasty (1644-1911). 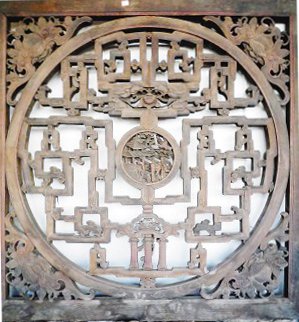 The “theme” of the window, according to Mr. Yang, is “four happinesses surrounding longevity” (si fu peng shou 四福捧寿).

The intricate design within the large circle is actually a very stylized version of the Chinese character for “longevity” (shou 壽).

At each of the four corners of the window frame are bats with wings extended and heads facing the circle.

The Chinese love rebuses which are “visual puns”.  In this case, the Chinese word for “bat” (fu 蝠) has exactly the same pronunciation as the word for “happiness” (fu 福).

The origin of the “four happinesses” is a poem by Hong Mai (洪迈 1123-1202) who was a scholar-official during the Southern Song Dynasty:

The window also illustrates the “Five Happinesses” (wu fu 五福), sometimes translated as the “Five Blessings” or “Five Good Fortunes”, which comes from the very ancient “Classic of History” (shujing 书经) compiled during the Warring States Period (475 BC -221 BC).

You will notice that the character for “longevity”, which occupies the center of the window, is also one of the “Five Happinesses” (wu fu 五福).

Adding the “longevity” fu to the four fu represented by the bats makes a total of five fu thus symbolizing the “Five Happinesses”.

The window has an abundance of hidden meanings.

For example, the shape of the window expresses the ancient Chinese belief that heaven is round and the earth is square (tian yuan di fang 天圆地方) also known as the circle in a square.

As another example, the large circle resembles an old Chinese “cash” coin (qian 钱) which is round with a hole in the center.

The hole in the center of a Chinese coin is called the “eye” (yan 眼).  Because the Chinese words for “before” (前) and “coin” (钱) are both pronounced qian, the window has the implied meaning of “happiness is before your eyes” (fu zai yan qian 福在眼前) (happiness (fu) = bats (fu); before (qian) = coin (qian); eye (yan) = hole in center of coin (yan)).

The newspaper article concludes with Mr. Yang revealing that the very detailed scene in the small circle at the center of the window has “visual puns” meaning: