The King of Qing Dynasty Coins 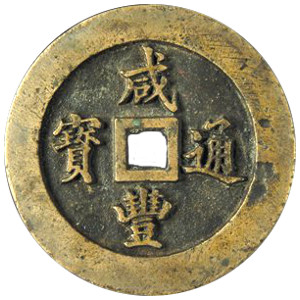 Although it is not included in most Chinese coin catalogs, this coin is known as the “King of Qing Dynasty Coins” (清钱之王).

Chinese coin collectors refer to it as the “daqing one hundred” (daqing yibai 大清壹百).

It is an extremely rare pattern coin and is the only specimen in existence.

The coin was owned by Mr. Ma Dingxiang (马定祥), who was regarded as one of the most famous Chinese numismatists of the 20th Century, and when it was auctioned in 2009 it became the most expensive ancient Chinese coin ever sold up to that time.

Xianfeng had to contend with a number of challenges during his reign.  The country’s economy was crumbling and he faced serious military challenges with the Taiping Rebellion (太平天国运动) and the Nien Rebellion (捻军起义).

He also suffered a humiliating defeat by the British and French forces in the Second Opium War (第二次鸦片战争).

To pay the huge military expenditures, Xianfeng issued a large quantity of paper money (Hu Bu Guan Piao 户部官票, Da Qing Bao Chao 大清宝钞) although the empire’s silver reserves were woefully inadequate to back the new currency.  He also reduced the size and weight of the common “one cash” coins, and even issued iron coins, in order to save copper which was in short supply due to the supply lines from Yunnan Province being disrupted by the wars.

Among the various mints, the Fuzhou mint was noted for casting many varieties of these larger denomination coins with local characteristics.

For example, the obverse inscription on this coin is xian feng tong bao (咸丰通宝).

If the Fuzhou mint had followed the directives from the central authorities, the inscription on this “100 cash” pattern coin would have been xian feng yuan bao (咸丰元宝)

Other special characteristics may be seen on the reverse side.

The inscription at the top reads da qing (大清) meaning Qing Dynasty or the “Great Qing”.  At the bottom is the denomination yi bai (壹百) which translates as “one hundred” or the equivalent of 100 cash coins.  To the right and left of the square hole are the Manchu characters pronounced boo fu identifying the mint in Fuzhou.

This coin is unusual in that the inscriptions state not only the reign title (xian feng), the denomination (100 cash) and the mint name (Fuzhou), but also the dynasty name (da qing).

The calligraphy is outstanding and is in a style used by the Fuzhou mint known as “mountains and valleys” (shanguti 山谷体).

This very rare pattern coin, which was never put into circulation, is large, heavy and very well cast.  The diameter is 7.25 cm and the weight is 197 grams.

This coin, which was one of the prominent pieces in the collection of Ma Dingxiang, sold at the Guardian Auction on November 11, 2009 for about US$314,000 (RMB 1.96 million).  At the time, this was the highest price ever paid for an ancient Chinese coin.

Many reproductions and fakes exist of this beautiful one-of-a-kind coin but the only authentic specimen now resides in the collection of the Jin Quan Coin Museum (金泉钱币博物馆).