During the 1950’s, a number of banliang (半两) coins were unearthed at a site near Xian (西安).  Among the coins was one unusually large and very heavy banliang coin.

While banliang coins cast in Qin (秦) during the Warring States period typically have a diameter of 32 – 34 mm and weigh about 8 grams, this particular specimen is 66 mm in diameter, 7 mm thick, and weighs an astonishing 96.15 grams.

Even more remarkable is that the coin is made of silver instead of bronze.

Mr. Ma Dingxiang (马定祥), one of the most famous Chinese coin collectors of the 20th century, obtained the coin from a friend and fellow numismatist in Xian.  Other famous numismatists of the time, including Mr. Luo Bozhao (罗伯昭), Mr. Sun Ding (孙鼎) and Mr. Li Weixian (李伟先), had the opportunity to admire the coin.

This coin is the only known specimen of its type and it is said that Mr. Ma treasured it for the rest of his life. 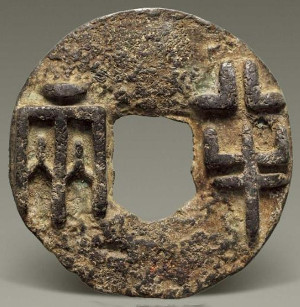 This very large banliang coin made of silver from the State of Qin (9th century BC – 221 BC) is shown at the left.

Although made of silver more than 2,000 years ago, the coin is not China’s earliest form of silver money.

In 1974, a farmer in Fugou County (扶沟县), Henan Province (河南省), unearthed a bronze three-legged tripod (鼎).  Stashed inside the tripod were 18 specimens of spade money.  One was a hollow-handled spade (空首布) while the remaining 17 were flat-handled spades (平首布).

All are made of silver and are now displayed at the Henan Museum.

According to an article in “China Numismatics” (1983年第3期), these spade money specimens were cast during the middle Spring and Autumn period (春秋时代) and are the earliest silver money ever unearthed in China.

Regarding the silver banliang coin, Mr. Guan Hanheng (关汉亨), a well-known Chinese numismatist and author of a book (半两货币图说) on banliang coins, has carefully examined the photographs and rubbings.  His findings are discussed below. 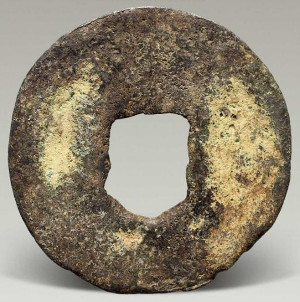 The coin clearly shows signs of having been buried for a long period of time.  The surface displays the oxidation that would be expected on a coin that had been buried for some 2,000 years.  There are small cracks on the reverse side.

Mr. Guan states that this appearance could not have been created artificially.

Even though banliang coins were also cast at the beginning of the Han Dynasty (206 BC – 220 AD), this silver coin matches those cast by Qin.

His reasoning is as follows.

First, coins were cast in two-piece moulds (钱范) in Qin and these moulds could produce 6 coins at a time.  The coins have only one sprue.

The casting of this silver coin is consistent with this method.  Its sprue (17 mm) is at the bottom which means that it would have been one of the two top coins in the mould.

Second, the shape and appearance of the coin is correct for coins cast in Qin during the Warring States period.  The center hole is rectangular, as opposed to the square holes of the Han Dynasty banliang coins, and the top and bottom horizontal lines have bent corners.

Also, the characters are written in small seal script (小篆) which was the calligraphy used on the coins of Qin.

For the above reasons, Mr. Guan is convinced that the coin was minted by the State of Qin.

As to why such a large coin made of silver was cast, Mr. Guan considered several possibilities.

In 221 BC,  Qin Shi Huang (秦始皇帝) succeeded in uniting China for the first time in history.  Following the unification, he standardized the country’s units of measurement including weights and currency.

It is possible then that this unique silver banliang was cast to serve as an official “weight”.

According to the standard “weights and measures” (度量衡) of Qin, one liang (两) was equivalent to about 14.4 grams.  A “ban liang“, which means “half liang” or “half tael”, would therefore be about 7.2 grams.

Mr. Guan did a survey of Qin banliang coins excavated during the past 30 years.  The coins weighed 6.5 – 7.5 grams each.  This would be within the range of the standard weight of 7.2 grams per coin.

As mentioned earlier, this very large silver banliang weighs 96.15 grams.  Taking into consideration that the coin may have lost some weight due to wear and oxidation, its original weight could have been 100 grams or more.  This would have been the equivalent of 14 government minted coins of standard weight.

It is possible, therefore, that this silver banliang was cast to serve as an official weight to be used with a scale to confirm that 14 regular banliang coins met the required weight of about 100 grams (100/14 = 7.14).

And, an official coin weight like this could very well have been cast in silver to signify its importance.

However, Mr. Guan feels that the coin was more likely cast for a different reason.

As has been seen with the six character knives (六字刀) produced by the State of Chu (楚), money was sometimes cast to commemorate a special event.

According to Mr. Guan, there were two important events that took place in Qin that could have resulted in the issuance of a commemorative coin.

The first event occurred in 336 BC which was the second year of the reign of King Huiwen of Qin (秦惠文王).  This was the first year that banliang coins were produced (初行钱).

The second major event occurred in 221 BC when Emperor Qin Shi Huang unified China.  He abolished the use of the various forms of money that had been circulating in the other six states and decreed that the banliang would be the legal copper (bronze) currency of the country.

However, no historical records mention that Qin Shi Huang ordered the casting of a special commemorative coin to mark the occasion.

Also, it is considered significant that Mr. Ma Dingxiang during all the years he owned the coin never personally proposed that it may have been made cast for this purpose.

For this reason and others, Mr. Guan feels that this large silver banliang coin was most likely cast to commemorate the first issuance of banliang coins in 336 BC.

Throughout Chinese history, when a new imperial reign or dynasty was founded, or a new mint was established, a special coin would frequently be produced to mark the occasion.  The coin tended to be larger than normal, well-crafted and made of very good metal.

As an example, China’s biggest ancient coin was cast to commemorate the opening of a new mint during the Ming Dynasty.

A special coin produced for these occasions is also known as a “vault protector” (镇库钱).  The coin would not circulate as normal currency but was believed to have charm characteristics that would bring good fortune and avert calamity.

In conclusion, Mr. Guan feels that this very large and unique silver banliang coin served as a vault protector and was cast in 336 BC to commemorate the firing of the furnaces that began production of the first banliang coins of Qin.