There is a certain Chinese bronze “coin” that is not included in Chinese coin catalogues.

It is sometimes referred to as a “charm” but is not included in Chinese charm catalogues either.

It seems that no one wants to have this coin in their collection. 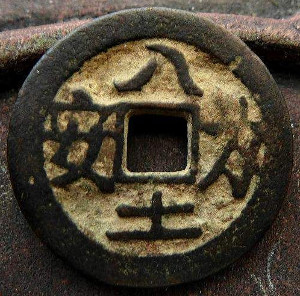 At the left is an example of the “coin”.

The inscription reads ru tu wei an (入土为安) which means “to be laid to rest” or “burial brings peace”.

The coin was not minted to circulate as money but was privately cast as a funerary object.  It was buried  with the corpse with the hope that the deceased will rest in peace and that the living relatives will have peace of mind.

Because these coins are not included in catalogues or other Chinese coin references, it is difficult finding authoritative information.

However, an article published in the Xinmin Evening News (新民晚报) in 2007 provides some insight.

The article states that several of these coins were discovered in a grave dating to the late Qing dynasty (1644-1911).

The article also emphasizes the importance the ancient Chinese placed on proper burial of the dead and that coins with the inscription ru tu wei an were placed in graves as a matter of course. 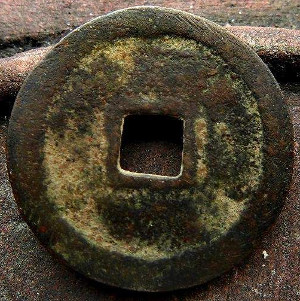 Reverse side of “laid to rest” funerary charm

The coins also had a broad rim of 0.3 cm and a fairly small square hole with a diameter of 0.6 cm.

The reverse sides of the coins were blank with no inscription.

Other specimens of this funerary coin may be seen here and here.

In years past, there was some controversy regarding the age of these coins.

The controversy centered on how the Chinese character wei (为) is written in the inscription.

On the coin, the wei is written in simplified Chinese (为) instead of traditional Chinese (為).  The argument was that because simplified Chinese did not exist prior to its adoption in 1956, these coins could not date from the Qing Dynasty or earlier.

Research has shown, however, that variant forms of the character wei, including 为, existed at least from the time of the Ming dynasty (1368-1644) so the controversy has been put to rest.

A different specimen is particularly interesting.  According to the description, the coin was found in a hoard of coins from the Northern Song dynasty (959-1126).

If the account is true, this burial coin would be considerably older than those from the Qing dynasty.

Forum members describe the coins as “really scary” and “horrifying”.  Many members state that they would not buy or own such a coin.

One forum member mentioned that because these coins were “put into the mouth of the deceased” during burial, they should be “thrown away because they are unlucky”.

In China today, the tradition of burying the dead has changed.  Cemeteries require a great deal of land and with China’s immense population, burials are no longer allowed.  Cremation is the law of the land although enforcement, particularly in rural areas, can be lax.

But traditions die hard and before the law came into effect some elderly people actually committed suicide to ensure that they would receive a proper burial.

Even now, some Chinese have a coin placed in their mouth upon death.  After cremation, the remains are interred and the coin is given to the family.